2013 again proved to be a perfect day, weather perfect as it could be,  could not have asked more — thank you Justin.  This year we added a different schedule with more activities and support from the community.  Back by popular demand we had the Home Run Derby, each team Men and Women nominated a slugger and they competed in the Derby.  The two winners received a gift card from Applebees who was the sponsor of the Derby. Hawk Radio and ESPN Sports Radio were both on hand during the day. FeRRous made an appearance as did Apple and Bee during the Home Run Derby.   We had Willow Tree Grove and Grumpy’s providing the food to keep the energy going all day, Trixie’s Cupcakes was there for the sweets, and AM caffeine!

This year we had a tie dye booth for the kids, but the adults were buying up the t shirts and doing their own tie dye, will be back in 2014, with other offerings for the younger set.

The Mocktail sponsored by Red Robin, proved to be a another successful tasting with great concoctions. This year each Mixologist was representing one of the Red Robin restaurants, so the competition was strong and all the drinks were with a different twist.  Keith Groller once again MCed for us. Red Robin has been very supportive in their sponsorship of this wonderful event.  All the entries were close, judges seemed to enjoy their roles and took the judging seriously.  It was a close competition, but Courtney Harrington won with her “Tropical Sunshine” concoction.  2014 the 4 Restaurant Mixologists will be returning, with an emphasis this year on the message. 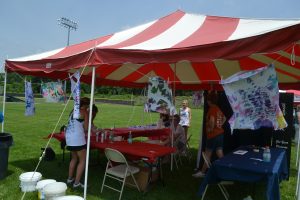 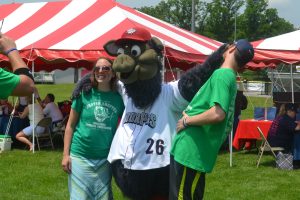 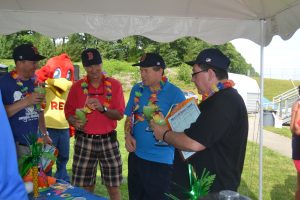 The “Young Ones” persevered and were a repeat winner. Team Swagger kept the game close in the first innings but lost their swagger, later in the game.  Their first appearance in the play offs!

In the Women’s Division we had a new winner, first time to play in the tournament and a winner!  The Diamond Gals, took home the trophy.  Congratulations to them. The Biddies were in the play offs for the first time, surprising everyone including “Zink” the captain.

In 2011 we thought it would be good to have the teams/players connect with the end result.  With that in mind  two teams will be selected every year, to choose a local charity or chapter and we will donate $2,500 to each charity.  We ask that the team participates in one activity with the charity.  .