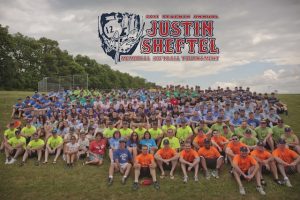 What a day we had.  The weather was probably the best ever, the crowds seemed larger, and we had two new champions!  Ferrous made an appearance, Mocktail wowed everyone the mixologist’s out did themselves with their amazing concoctions, it was a very close competition.  To view a video of the day, and sponsorship info go to: 2011 Tournament on You Tube

Big Red also was part of the day, visiting with the ‘kids’ and playing with the adults.  “Paint the Hat” had a great participation and will continue for 2012.There was tough competition this year, the Sea Jays were focused and seemed determined to win. They played against a newcomer — The Number Crushers — what a game. It was back and forth most of the game but at the end Sea Jays managed to put more runs on the board and won the trophy.In the women’s division we had another playoff with the Home Girls and the Champ-Hens competing.  The Home Girls were able to hang in and win the the game., stopping the Champ-Hens from being a three time winner.  2012 may be the year for a differant team to claim the trophy.We decided for 2011 we would like to connect the teams/players with the end result.  With that in mind we will select two teams every year, they will select a charity of their choice that is a local charity or chapter and we will donate $2,500 to each charity.  We ask that the team participates in one activity with the charity.  For 2011 we chose the two winning teams Kyle Zinkler and Andrea Nuschke, captains for the Sea Jays and the Home Girls.  Andrea selected the Autistic Society of LV, and worked with the charity at a basketball tournament that also raised money.  Kyle selected the Boys and Girls Club, they built bikes for the charity to distribute at Christmas.